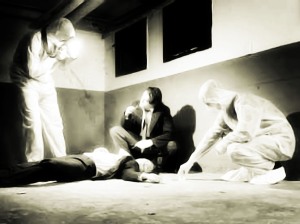 Ever watched “CSI” and wondered, “Why would anyone choose to become a pathologist?” Well, I used to feel the same way about crime scene cleaners (and proctologists, but let’s not go there…)

Isn’t it a creepy job, cleaning up the mess left behind when someone has been murdered, or committed suicide or just been left to die because no one knows they’re there? You’d have to be some sort of morbid freak to want to do a job like that, wouldn’t you?

Well, as it turns out, the answer is “no”. And it took the testimony of two people to help me understand why.

The first was a young Californian guy who pretty much “invented” the profession of crime scene cleaning. I met him a few years ago when I was researching his world for a screenplay I was writing. This guy intrigued me by saying that he had identified this unfilled niche in the “clean-up crew” marketplace because he had been looking for a job that fitted his personality. Initially he had thought about being a mortician…

“Ah-ha!” I hear you say. “He was a ghoul, a death-freak, some sort of whacked out necrophiliac…” In fact, he was none of these things: just a clean-cut guy in a sparkling white polo shirt (complete with corporate logo) and neatly-pressed chinos, with a charming smile and a dry wit… not the least bit what I was expecting. He was – by his own admission – a “neat-freak”: he didn’t like mess, he saw a gap in the market, and voila – an industry was born.

My second revelation came while I was watching a documentary about another crime scene cleaning pioneer. Her story was very different… and much more moving. Her brother-in-law had committed suicide, messily, and after the cops and the coroner had done their work and the body had been removed, she was horrified to discover that the mess and body fluids were left behind for her to clean up.

And it was while she was scrubbing her brother’s blood from the living room carpet and cleaning bits of his brain from the walls, that she had her own moment of truth: nobody should have to do this for a loved one. The next day, she started her own crime-scene cleaning business.

And that’s the thing that astonished me, that I’d never thought of: she was doing this job because she cared… cared that those left behind shouldn’t be further traumatized by the aftermath of a violent death. Cared enough, in fact, to dedicate her life to providing a service that would help ease the pain of those recently bereaved and return their world to some semblance of normality.

But what affected me most of all was when she revealed that, as the years passed, it wasn’t the murders or the suicides that really upset her: it was the “undiscovered deaths”.

It’s the work of the crime scene cleaner to sweep that life away, to not only scrub away the “decomp” left behind when someone dies unnoticed and unmissed, but also to shovel the detritus of their lives into so many bin liners and take it to the incinerator, their possessions unwanted, their passing unmourned by anyone.